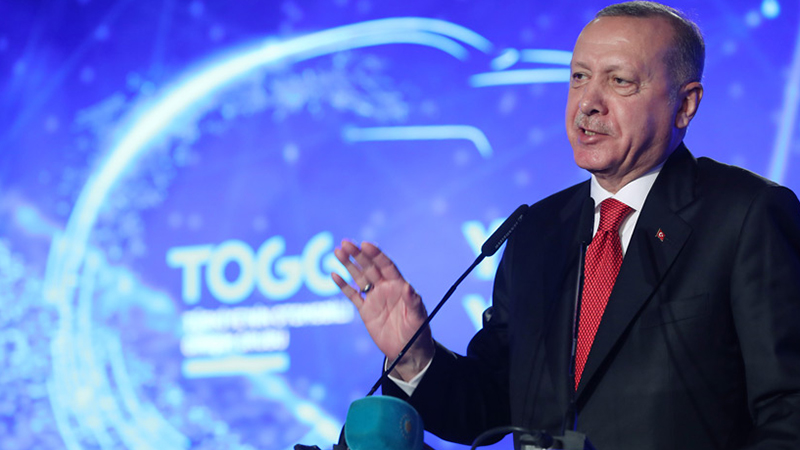 Turkey's President Recep Tayyip Erdogan on 18th July laid the foundation for the country's first indigenous car plant announcing that the vehicle will be ready by 2022.

"We plan to complete the construction of the factory in 18 months and take our first vehicle from the production line in the last quarter of 2022,"said Erdogan at the groundbreaking ceremony in the northwestern province of Bursa. Europe's first and innate electric car and SUV model will set off from Turkey, he said and noted that three years after commencing production, the vehicle will be the "single-brand passenger car produced with the highest indigenousness." Erdogan added that Turkey started the construction of a "huge production complex with different facilities that will radically change the perception of a factory in people's minds." He went on to say that he was proud of realizing a huge project despite the novel COVID-19 pandemic, which has claimed thousands of lives around the world.

Erdogan said that it was a historic step to realize a 60-year-old dream to produce the country's indigenous car. "We believe in Turkey's potential and the determination of the Turkish nation's struggle against difficulties. This government brought Turkey to dreams in every field, from industry to production, from health to national technology. The government's Treasury will be sufficient to finalize the project in case of a set back through this process," the president stated. He added that the Turkish people voiced supported to the project, which was presented to the public officially on 17th December. "A survey show that our nation's support for this project is over 95 percent. This picture further enhances the motivation of both us them and team that is passionate about it."

During the pandemic, the whole process to begin the construction of the factory was completed and 93 percent of the selections of supplier firms, 78 companies, are in Turkey, Erdogan stated. He said, the registration of its exterior design in China and the interior and exterior design done in European countries are over. The design registration processes in Russia, South Korea, Japan and America are ongoing and all of the user research and engineering work was carried out within the planned calendar, he noted.

The plant will host Turkey's first indigenous car engineering, design and production center. The CEO of TOGG, the company creating the local car, said on 18th July that the first indigenous car plant is more than just than as automobile factory. It will have centers for research and development and a customer experience park, Gurcan Karakas said at the groundbreaking ceremony. The construction of the factory is expected to be completed in 18 months and it will have the capacity to produce 175,000 annually. The factory is designed having taken into consideration environmental concerns.

"Volatile organic compounds emit less than 5 gr/m2, it is one ninth of the legal limit in Turkey, one seventh of the legal limit in Europe and it is the cleanest in Europe," he said in a statement. It also incorporates a smart production network with real-time data and the internet of things. He said one of the most important issues in electric vehicles is the battery.

"We have come a long way in the development of the battery and e-power unit architecture. We have almost reached the completion of the design of our high-tech battery that will provide over 300 and 500 kilometers (190 to 300 miles) of range with different packages."

He said the factory produce one million vehicles in five different models until 2030.

The board chairman of TOGG, Rifat Hisarciklioglu said, "As the automotive world is coming out of its shell, Turkey will become a very important player at the table." He added, "Hopefully, we will now be on the winning side. Because this automobile belongs to 83 million people. Because it will not only be produced in Turkey, but also its trademark, patent and design will be completely ours."

Turkish trade minister, Mustafa Varank said, the car designs were registered in the EU and China after it was announced last December.

TOGG was established in 2018 under the leadership of the Union of Chambers and Commodity Exchanges of Turkey (TOBB) by companies of Anadolu Group, BMC, Root Group, Turkcell and the Zorlu Group in a collaboration.

It will produce five different models – SUV, sedan, c-hatchback, b-SUV, and b-MPV – until 2030 and own their intellectual and industrial property rights.