The first place in the world in housing, which has lasted for 2.5 years; TURKEY

The figure I was waiting for finally came. According to the Land Registry Cadastral data, real estate sales broke a record in 2022.

Moreover, this record is two-sided. Both the number of sales of 1.5 million units in residential sales was exceeded for the first time, and non-residential real estate, including land, land, field and commercial, reached an all-time high.

➔Housing sales, which increased by about 29 thousand compared to the previous year, increased to 1 million 521 thousand units in 2022.

➔December data has not been announced by TURKSTAT yet, but according to the information obtained by AA correspondent from the Land Registry and Cadastre, housing sales reached 193,402 units in December.

➔This figure is 14.6 percent lower than the 226 thousand 503 units in December 2021. In this respect, the decline in housing sales that started with July is still continuing.

However, the 31 percent increase in the first half saved the year and an increase of 29 thousand units or 2 percent took place.

➔As can be seen from the adjacent graph, non-residential real estate sales exceeded housing sales for the first time in 2021 and reached 1 million 529 thousand units. 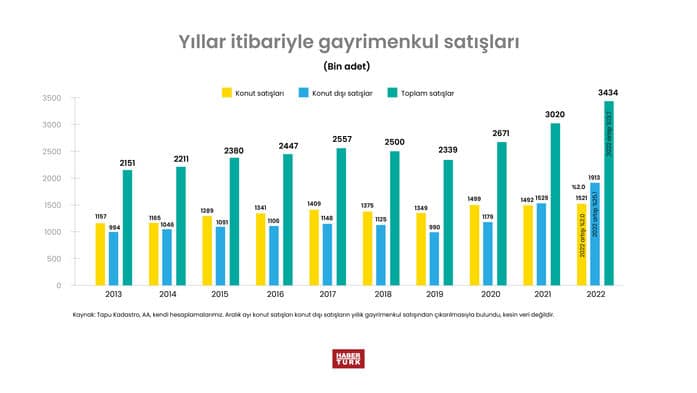 ➔In 2022, non-residential real estate sales increased by another 25 percent and reached 1 million 913 thousand units. It has Decisively opened up between itself and housing sales.

➔The price measurement of non-residential real estate consisting of land, land and commercial real estate is not carried out. Therefore, we do not know to what extent the increase in demand affects price increases.

➔However, it is not difficult to guess that it mobilizes prices at a level close to the housing side.

➔The number of sales increased by 13.7 percent and 414 thousand in a year. An increase in this rate also took place in 2020, when there was a credit and price boom.

THE WORLD CHAMPIONSHIP, WHICH HAS LASTED FOR 2.5 YEARS

➔ In 2020, when the economy was closed due to the pandemic, business owners invested their capital or money in housing and real estate in the first place, and the real estate market revived.

➔Thanks to this vitality, Turkey became the country where housing prices increased the most in the world starting from the middle of 2020 and until the third quarter of 2021 and 2022.

➔The listings are made quarterly by the international real estate company The Knight Frank, based in the UK. During the same period, Turkey also appeared on the first place in the IMF and OECD’s lists in terms of price growth. 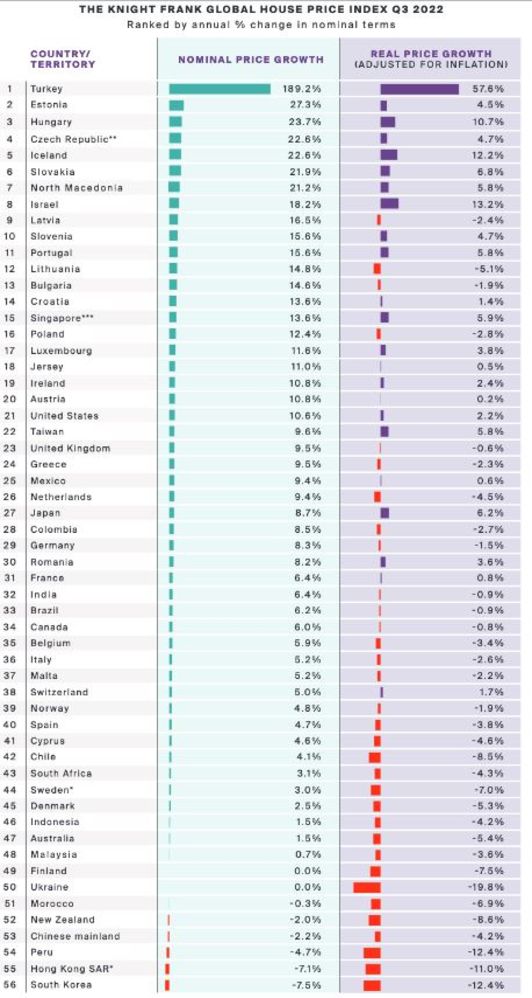